In June of 2006, I glanced into a neighbors pasture as I drove home. I was surprised to see a Belgian foal on the ground and stopped to investigate. As it happens, he was 10 minutes old and I watched as he stood and took his first steps…it was love at first sight. I had no experience at all with draft breeds but this did not deter me from inquiring about him and after a brief conversation with my dairy farmer neighbor, a deal was struck. Having spent the past 10 years studying natural horsemanship pretty intensively, I felt pretty confident about his early handling. Turns out, everything about him was easy. Weaning was a simple matter. Halter training and leading went uneventfully. He learned to stand quietly for me to trim his feet with very minimal fuss. As a yearling I brought him to Mark Rashid while he was visiting New Hampshire and he got us started with lunging and ground driving. Peanut was indeed an easy-going horse…sensitive and sensible…all was going well.

As a two year old, Peanut was acquiring some size and although he continued to be easy to work around, I became increasingly aware that we were making less progress toward our goal of driving. I always planned to train Peanut to do some work around my small farm and though I thought that goal could be easy to attain, in reality I did not possess the experience to put together the steps to get from where we were to where I wanted to go. I was stalling….and he was getting bored. One day, he simply left. I like to tell people he was scared and jumped the fence in fear, but the truth is, he left because I had nothing of substance to offer him. Like when you go to a dinner party and there isn’t anyone interesting to talk to…you make an excuse and leave early. I know enough about horses to not take this sort of thing personally. It’s just feedback after all.
I first met Ted Russell at the Beginners Driving Clinic last spring and after talking with him more at NEAPFD this fall, I decided to call him for help. It was hard for me, being somewhat of an alpha mare, to turn over training to someone else. But Ted’s style is very horse-like and that made it easy for me. He has a quiet, but confident manner that I think represents the non-dominant leadership that Mark Rashid describes in his books. His equine students outrank him in size by many categories, so intimidation is not an option. That first impression of Ted would hold true during the time Peanut spent as his student. Ted is the sort to go with the horse a long ways before exerting any pressure on the horse to commit to his idea. This kind of composure is not common in my experience and comes from many years of experience with all kinds of tricky situations. Ted doesn’t get mired down in minutia, like I could. He focuses on what is working and not on what isn’t. It’s that kind of focus that creates progress. 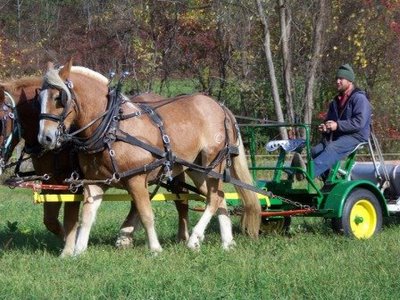 I tried as much as possible to make time to come out and sit in on Peanut’s education. The first week, Ted had him hitched with his extremely valuable Belgian, Clayton, and let Clayton educate Peanut about how things work in harness. By the time I came out at the end of a
week, Peanut was mostly pulling his own weight and pulling a harrow and manure spreader with Clayton. 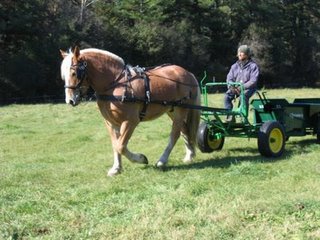 The second week, Ted had Peanut working alone. They did long trail drives, pulled the manure spreader and re-enforced the verbal cues he learned while working next to Clayton. I was amazed to be actually driving him after just two weeks of training, through the woods, up and down hills and through water. I certainly made more mistakes than Peanut did that week.
The third and final week, Ted skid wood with Peanut. I had expressed a desire to have Peanut pull me around on skis this winter (skijoring) and Ted thought skidding wood would be a good primer for this activity. Apparently, it took several hours in the pouring rain the first day before Ted was satisfied with Peanut’s performance. Seems like that worked well, as Peanut had the job down pat the next day.
I went up for the weekend at the end of that week…to spend some time with Ted in lessons and to bring Peanut home. Ted and Josie graciously opened their home to me and my pooch, Newt for the weekend. Ted made the best corn chowder I’ve had in years! Who knew he could cook?!
On Saturday, I drove Peanut solo, even gave a visitor a ride around the meadow. Ted made it pretty clear that his faith was in Peanut, not necessarily me. Later we went on a long drive through the woods, some of it pretty rough, through water, across a busy road and into the countryside as Ted showed me the sights. Peanut was perfect! It was like he had done this his whole life! Ted made sure I was using cues appropriately and gave me lots of feedback.
On Sunday, Ted taught me to skid wood. Now THAT is a fun adventure! After watching Ted skid some, he handed me the reins and supervised me…at first very close at hand. Before I knew it he was just taking pictures. Peanut appears to enjoy this work. At one point, the tree we were skidding hit a big rock and Peanut stalled. Before I could redirect him, he put his shoulder into it and pulled the wood free and on we went…amazing! I think skidding wood was the perfect exercise to put to work all the skills Peanut had acquired over three weeks with Ted. He had to stand for periods while I fumbled with the chains and the tree, then move around in tight quarters, adjust position as needed to get the wood clear, stop periodically for me to switch sides on the log, adjust speed so I could keep up. Myself, I had to adjust my focus to not just my horse, but to the trees and the skid…go wide at the corners, plan ahead for path way ahead…quite a change from riding. When we were done, I felt like we had really done something…it felt very good. 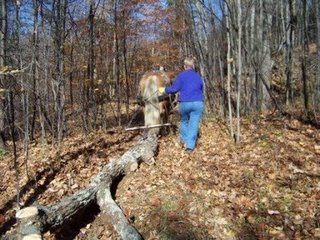 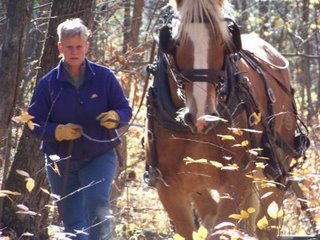 Now I have Peanut back at home….which also feels very good. I know have to continue the work Ted started and I at least now have a vision of what the work should feel like (maybe later look like) and that has made Peanuts time with Ted more than worth the money spent. The best part is that I have a mentor I can call when I get stuck….I think this is key for the novice teamster. What Ted gave me was the broader picture, the landscape in which I will work with Peanut. I have confidence now that we can proceed together toward the goals I had set previously.
In closing, I would encourage anyone struggling to progress or who might be feeling stuck with their team or horse….find some help with a teamster like Ted Russell…it is money and time very well spent.
Stay Tuned…