My last post about Reno was in late March and was full of optimism, as we had finally seemed to overcome his hock injury and were in ‘rehab’ mode.  There are many reasons why I have not updated his progress.  Foremost is a lack of time.  Spring is always a very busy season for me with pasture maintenance, veggie gardening (this year I have extensive plots of potatoes and corn) and this year pigs.  But in all truth, I was waiting to feel optimism again.

Two weeks after my last post regarding Reno and the beginning of what should have been his rehabilitation, he had a set-back.  I found him on 4/7/9, standing alone in shock, hemorrhaging from his previously injured left hind.  He had had a fight with the fence and wrapped the poly wire around the leg, struggled (and eventually tore down a complete length of fencing), lacerating the leg below the hock right down to the canon bone.  My vet confirmed that he had severed the extensor tendon completely.  In addition, she was worried that the flexor tendon might be at risk with a late necrotic event (because the wound was circumferential).  I was devastated and quite frankly, depressed.  Once I got Reno settled in a stall, for what would be 3 weeks of stall rest, I phone his owner, Andre and told him about the accident.  I’m pretty certain Andre never expected Reno to come back to work and simply wanted some sort of life for him.  I simply asked for Reno to be mine, permanently.  For some reason it seemed important at the time, though I have no doubt Andre already thought of Reno as mine, and that enabled me somehow to go forward with more resolve.

Three weeks of stall rest, daily cold hosing and dressing changes later, I turned Reno out with the mini rescues in a smallish flat turnout.  It was progress.  His attitude has been awesome throughout.  Even during the stall rest he managed to be engaged and friendly with my nieces and nephews…who adore him.  I took him out for a short walk once or twice a day, just to keep his muscles from freezing up entirely. 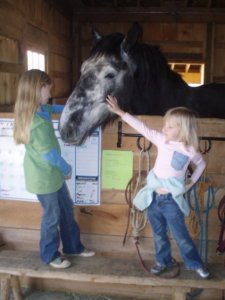 Extensor tendons enable a horse to lift the toe during gait to allow proper landing on the foot on the ground.  Injury to the tendon causes tripping when the toe inadvertently gets flexed on landing, so the toe hits first and buckles.  Its scarey to watch it happen and can be unnerving to the horse, but Reno never got excited about the problem and it happened less and less frequently.  I did alot of reading about extensor tendon injuries and realized that a good 80% of them recover completely…piece of cake…I’ve beat odds way worse than that!!!

My immediate concern was that we were losing the gains we had made in his hind end development from earlier in the spring.  He was already in such bad shape behind…atrophy on the left, fatigue and spasm on the right.  And anyone who has ever rehabilitated a horse knows that colic and founder are both eminently waiting in the wings for an injured animal.  I worried incessantly, but all I could do was wait.  Three more weeks in  the small turnout and we were still ahead of the curve….I was amazed.  The general time line for tendon injuries is 6 months (or more).  In 6 weeks he was able to rejoin the main herd.  I probably pushed this time line abit.  I’ve always believed that healing happens faster when the injured area is subjected to some amount of stress.  The body has mechanisms in place that accelerate healing when necessary…I was counting on this mechanism to jump start his progress again.

Thankfully, my instincts were good and he did well.   Two months later (to the day), I drove Reno and he pulled a load.  It was a short bit of work, but it seemed like a mountain of accomplishment!

After this inital success, I drove Reno 2-3 times a week, for short distances, but incorporated hills and lots of stops at neighbors houses.  He was getting stronger and stronger.  His ass was also filling out nicely!

In July, we had a visit to Vermont with Reno’s extended family and he pulled a wagon with Coral, Andre’s lead mare. Reno was awesome, as was Coral and I found my optimism once more. 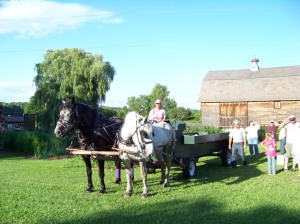 Since then I have started to ride Reno…but that will be a new post.