I’ve had Bogie home from the trainer for almost 2 weeks now.  I’m sticking to my plan and have left out the timeline, going very slowly.  I spent most of the first week in observation mode, trying to see where Bogie’s mind is at.  Having him away from the main herd has been very helpful, in that I can see his reactions to me more clearly.  Its amazing…he is all over the map!  From pacing the fenceline looking for the safety of the herd (RBE) to stomping on the chickens (LBE) to frozen and tense while I work around him(RBI) and then to frisking me for cookies (LBI)…all in a matter of a few minutes.  Phew…he’s like a friggin rollercoaster!

The first big ‘aha’ was that he really does not tolerate me approaching him directly.  He might manage to stand still, but he is tense and suspicious. I had missed that before.   If I have something in my hand, like a brush or a leadline, forget it, he is out of dodge.  This is the response I have seen before and attibuted it to the ‘thing’, when really I was just putting more pressure on a RB horse in an introverted moment.  What a dummy, lol!

So I have been really sticking to a consistent pattern..bring water, hay and grain, then cleaning up his paddock, in that order.  I have been waiting for him to approach me to instigate any direct interaction.  He has to be in a LB mode to get his curiousity up and I really want to keep him in this thinking frame of mind.  It was about the middle of last week when we had a break through.  I was down for his evening meal.  He had pooped where he eats, so I had changed up the pattern and was cleaning his paddock BEFORE getting his hay and grain.  So I was cleaning up his paddock, observing his behavior out of my peripheral vision.  He was pacing the fenceline.  Then he stopped abruptly (and so did I….surprised by his sudden lack of motion), looked over at me and started yawning vigorously.  I turned toward him and waited.  As he took one step toward me, I thought ‘There it is!  A question! You forgot my hay?!”  Thrilled, I set my manure fork down and walked over to the shed to retrieve his dinner.  To my amazement, as I arrived at the shed door, he was at my shoulder.  We had made contact…mentally…through communication.  It was a profound moment.

Since then he has been way more left brain than right.  I still have to be very careful about how I present my energy and about not putting more pressure on when he is unconfident.  Its very hard for me.  The other day I wanted to put a cooler on him.  It was cold and had been raining and he won’t go in the shelter.  I just wanted to get him dried off.  It was a perplexing situation.  I knew he would be unconfident about the cooler, and worried I would set us back if I pressed the issue.  On the other hand, the night was slated to be cold and I would be up all night worried about him if I didn’t get him warm.  I considered bringing him up to the barn and locking him in a stall, but that would have required catching and haltering…the one thing I promised I would not rush him into.  So I decided to try with the cooler, but had a plan to abort the attempt if things went south.  Put the relationship first, right.  I presented my idea to him by letting him sniff the cooler.  He obviously liked my idea and let me slide it onto his back and over his head, at liberty, without any resistance.  When he needed to move his feet as the leg straps touched him, I acknowledged his apprehension and idea about movement by simply going with him without adding pressure.  Worked like a charm.  When I was done, he licked his lips and set about frisking me for cookies.  Hysterical.

We’ve really made little progress on my list, probably still at step 1 and 2, but the tiny microsteps have allowed me to investigate other directions we might want to explore first,  For instance.  Bogie likes treats, when in a LB state of mind.  In fact, one of the ways I can tell he is LB, is that he is looking for treats from me.  But he always keeps me out in front of him in zone 1.  I realized this was a game he was pretty good at and it allows him to block my approach to the ‘catching areas’ in zone 2 and 3.  So I plotted a strategy to convince him that I am way more interesting in zone 2 or 3.  My initial approach into these zones would make him move away from me, sometimes in a RB over-reaction, but sometimes in a ‘you can’t catch me’ snotty manuveur.  I found that I could more easily back into that space, keeping my energy off Bogie.  Once I could do that, I started to only give treats from that spot near his shoulder.  Its good for him to bend around like that as well, as the trainer was concerned about his unwillingness to bend in the neck.  We’ve progressed right along with this game and I am now working on getting him to position me there by himself.  In the meantime, I can now stand in zone 2 or 3 and rub his withers, neck and even adjust his collar without losing him to the dark side. 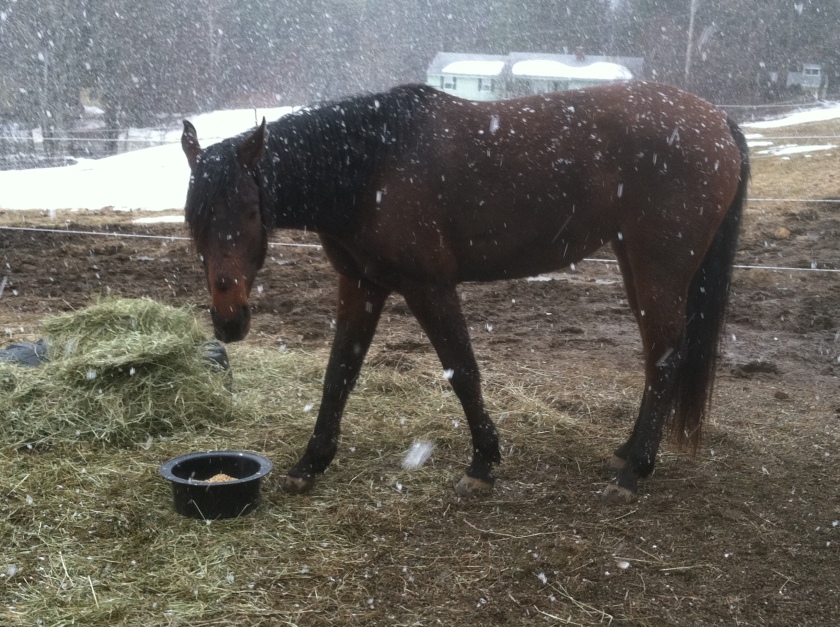