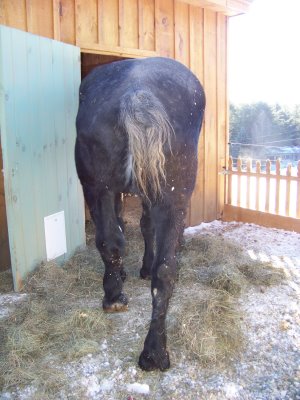 Reno is a 5 year old Percheron gelding. Trained and worked in harness regularly, Reno came in from the pasture lame one day. No one really knows what happened. Just a blown up hock and a lame horse. For several weeks he would improve then appear to reinjure himself in a frustrating downward spiral.
I decided to accept him as a rehab project in January when his owner, frustrated, was looking an option that did not involve euthanasia. Reno was apparently a very nice horse, one who could be handled and ridden by children, despite his size…18 hands.
Above is a photo of Reno from behind on the first day. No he is not walking…he is standing. Note the contracture and atrophy on the injured left side. He virtually stood like this nearly 100 % of the time, with the left hind in the air. 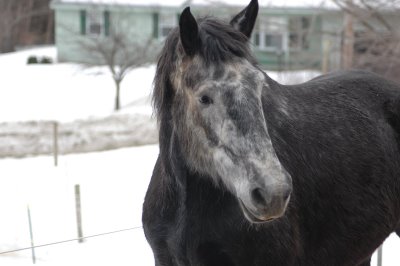 I put Reno in a smallish paddock with my mini fosters. He was great with the little guys and there was no drive for him to overexert himself. It was a level area and a good place for him to move around but not enough to aggravate his injury. The first few weeks he was laying down alot. He learned how to lay on the bad side as well as the good side and get up equally well (very sensible horse). His attitude has always been inquisitive and engaged…..he seemed happy….despite his injury.
A month later he was getting worse, limping pathetically with every step. I was starting to wonder if we could save him, despite my attempts at conservative management with nutritional supplements, minerals and rest. I had my vet out, who did more xrays, ultrasound and needle aspirates. Nothing was definative. I still had a suspicion that there was an infection in the joint. I mean it was huge and hot most of the time. So I talked my vet into IM antibiotics. We devised a plan for penicillin and gentamicin, both given twice daily. These were huge shots…one was nearly 20 ccs, ouch! Reno, at first apprehensive, soon accepted these shots without being restrained. I think he understood that they were necessary. I told him that every day.
Two weeks of these antibiotics were worth the pain and aggravation. He was walking without a limp. My vet was impressed and I was relieved. He was turning the corner at last.

Last weekend, as I was cleaning up the paddock, it occured to me that Reno looked bored. Since he was moving so well, I decided to let him over to the main track with my main herd for a visit. They had known him from over the fence, for 2 months now, so I knew it would be no big deal. Well, he froliced…quite literally….playing with my belgian youngster. I was amazed to watch him trot, canter and gallop soundly. He even did a sliding stop that made my heart skip a beat…worried that he might re-injure himself. But he handled the exercise very well and seemed quite happy to have the social interaction.

I have been watching him carefully for signs of a relapse, but he is tolerating more and more activity everyday. I think we have turned the corner and he is now ready to rehabilitate. He will need to rebuild lost muscle and reconnect his poor back which is twisted from his abnormal body habitus for all these months. But I am now very optimistic.   He may not regain the ability to do heavy work, but I think he will be able to perform at a lower level with appropriate rehabilitation. Above, a photo from 2 days ago. Note the improvement in muscle on the left as well as the normal weight bearing. This is stuff that makes me smile!

Reno has been turned out with my gelding herd for 2 weeks now. My vet and I both agree that he has shown enough improvement that he now has to USE the leg to get function back. Still on oral antibiotics, we’ve had no set-backs despite alot of playfulness in the mud with the other horses.

He finishes his antibiotics (a full 6 weeks) in a few days. I’ll be watching him carefully for any relapse at that point. So far, so good.