Introducing a new horse to a stable herd is always an undertaking.  It takes nerves of steel and an optimistic attitude. 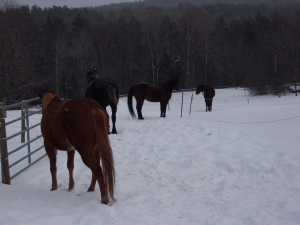 Ideally, a new horse would be exposed to the new herd over a fence line for a while, then have some turnout with a low-ranking herd member…so they have a buddy.  Then they enter the herd proper.  There is always some squealing and some running around.  They all have to sort out who is the leader and who follows.

Beaugart does not like being kept in a stall.  I like that about a horse and I understand it.  I knew I needed to get him outside and soon.  Being winter, I have limited options…its hard to move fences in January, lol!  So my only option is to integrate him into the herd relatively quickly.

My vet was out today and looked him over.  Besides being underweight and slightly dehydrated, she thought there were no serious issues and thought some outdoor exercise would do him good.  She did not recommend adding him to the herd just yet, but acknowledged that I might not necessarily follow her guidelines to the letter;)  True to her word, I set about freeing Bogie as soon as she left the barn.  I locked up Manny and Reno and turned Bogie out with Doc, my retiree.  As I expected, there was no drama at all.  I let Reno out and he was alittle pushy and bossy, but not persistently so.  Finally I let the alpha out….Manny.  He surprised me completely.  In stead of being his usual nasty self, he investigated the new horse…softly (almost protectively) and moved him here then there.  He was just showing the new guy who was boss….but he wasn’t doing it in a very aggressive way (which has been his style in the past).  So I am optimistic that Bogie will be able to join the herd permanently very soon.  One of the things I love about my track (I have a 15 foot track around the pasture next to the barn) is that there is nowhere for anyone to get stuck…..they just keep moving on the track in a circle…there is always a place for them to go.

Manny stares Bogie down. Bogie has to come to an agreement with Manny, the alpha horse in order to join the herd.

Manny moving Bogie around the track. Bogie has an effortless way of moving..can't wait to see what that looks like with some weight and a topline!

Even the dog seems to need to negotiate with Bogie for terms...